Parents are kept informed and involved. The MTSU Parent and Family Association (www.mtsu.edu/parents) sponsors Family Weekend, distributes six newsletters annually, hosts a Facebook group, and networks with MTSU parents and families. Best of all, the Parent and Family Association is a low-pressure organization that lets you stay involved in your student’s life without compromising independence.

CUSTOMS, a two-day orientation process, helps students get off on the right foot. CUSTOMS provides important information about advising, registration, and academic opportunities for students and families.

Students are kept as safe as possible. MTSU was recently ranked among the Top 50 safest large universities in the nation by collegechoice.net. The campus safety ranking was developed using each school’s general crime report, along with the number of documented hate crimes, violence against women, arrests made, fires, and discipline-enforced activities.

To teach incoming students how to resolve conflicts without violence, MTSU has developed a series of programs on conflict resolution and mediation. The University Police Department protects the campus with 24-hour police patrols, emergency dispatch, and campus escorts. Alert4U sends texts and emails during severe weather and other emergencies.

MTSU Police officers are on duty 24 hours a day, seven days a week. All 911 calls from campus are routed to MTSU’s dispatch. (Note: 911 calls from cellphones are answered by Murfreesboro City Dispatch.)

Rave Alert is part of MTSU’s emergency alert system, Alert4U, and is used to send text, email, and/or voice critical notifications. The system is used when circumstances pose a threat of imminent danger and/or when it’s vital to contact members of the campus community quickly. With five new tornado siren towers, MTSU is continuing its commitment to protecting everyone on campus. 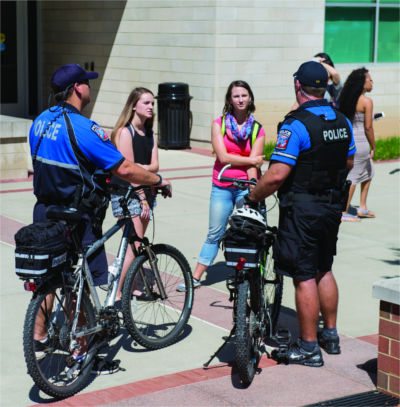